The LVenture School Initiative is the culmination of a long journey for its team.  We summarize that journey in the following graphic, followed by a brief description of the key stages. 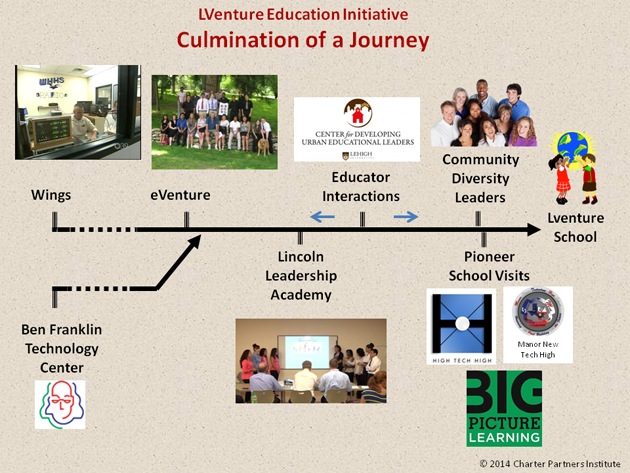 One early effort goes back to 1993 when entrepreneur Todd Welch talked to his old high school, Warren Hills Regional High School in Washington, NJ, about providing a hands-on, real-life business experience for youth at the school.  Todd recalled that he had not done well in the academic environment of school, and he believed there were other kids like him who would benefit from a hands-on approach.  Todd worked with teacher Ralph Fiore to co-found a school-based, student-run business named Wings Inc. Wings has grown from an extracurricular club running a school radio station, to include several student-run businesses, including a radio station, a TV station, a school store, a school bistro, and a community newsletter. More than 2,000 students have participated in Wings, which is now a fully accredited course through the Department of Education, State of New Jersey.  http://www.whwings.com/

In the summer of 1983 Mark Lang was a new Assistant Professor of Mechanical Engineering at Lehigh University when Lehigh was chosen as one of four locations for a Ben Franklin Technology Center.  Mark was asked to help get the center off the ground.  The original mission was to spur entrepreneurship by funding university research.  However, Mark noticed that the tie between academic research and commercial application was too tentative to impact any business growth.  He led an effort to rethink and redirect Ben Franklin into an effective entrepreneurial development and assistance program that became a worldwide model.  Mark ended up staying there and leading the center for almost 20 years. However, in the late 1990’s Mark noticed that, while Ben Franklin was able to help individual entrepreneurs, the region was not becoming more entrepreneurial.  He concluded that the changing nature of the global economy was driving a need for everyone to be more entrepreneurial in thinking and action, and this is a major issue with public education that is dragging down the competitiveness of the U.S.

Mark ended up leaving Ben Franklin in 2001 to work on this education issue.  He was able to understand from his extensive experience working with entrepreneurs that entrepreneurs follow a pattern of action and thought that can be taught, but not in any conventional teaching approach.

Todd Welch later moved to Bethlehem, PA, where he tried unsuccessfully to get any Lehigh Valley schools to work with him on a program similar to Wings.  He then started a one week summer entrepreneurship camp for high school students called eVenture, held at a retreat Todd and his brother owned in Forks Township (Charter Farms).  Mark Lang was one of many in the community to whom Todd reached out during the early days of eVenture.  Mark recognized that Todd was teaching the true essence of entrepreneurship based on his own experience.  Mark first assisted and then in 2008 took over eVenture as Executive Director of Charter Partners Institute, a small non-profit set up by the Welch family.  Mark was able to build on the intuitive teaching approach used by Todd to make eVenture a truly transformational experience for students.  http://charterpartnersinstitute.org/programs/eventure/

Mark and Todd continued to search for opportunities to bring entrepreneurial learning into mainstream education.  This led to a number of partial day programs that were every well received, but no school would go any further.  This changed when Mark talked with Sandra Figueroa-Torres, founder of Lincoln Leadership Academy Charter School in east Allentown, in 2011.  Sandra noted that she wanted her students to not just pass tests but to master leadership skills necessary for success in today’s economy.  They created a requirement for all students where they identify significant issues in the school or community without good answers, form teams, and develop their own solutions to those issues, culminating as their graduation project.  Mark came to Lincoln to co-teach this project activity as part of a seminar class in the Junior and Senior years, and he adapted his prior experience to the real school environment as needed.  This has become a unique and very successful part of the Lincoln education, where all students test and develop their skills to understand problems, form and manage teams, take steps toward solutions even while the issues are ambiguous, plan solutions, and learn from failures along the way.  http://llacslv.com/     http://charterpartnersinstitute.org/lincoln-leadership/

While both the eVenture and Lincoln Leadership Academy learning experiences yielded similar transformations for students, we noticed that eVenture students progressed further in a week than many Lincoln students did in a year.  The learning culture/experience we use clashes in many ways with the traditional Compliant learning environment in the regular school.  This led our team to consider what we could accomplish if we designed an entire school around the immersive, hands-on, student-owned learning environment. As we began to explore this with educators, we learned that education research supports that approach as more effective for learning.  It is typically called project-based learning (PBL) or inquiry-based learning.  However, we learned that, while projects and PBL are fairly commonly used as an application component to traditional lessons, the student-directed inquiry form of PBL that did so well in the research is rarely implemented because it is so different from how educators have been taught and what they have done all their careers.  We were encouraged to develop a model school following the best inquiry-based learning practices, with the suggestion that others could make a similar transformation if they saw it working in a real school.

As we continued, we looked for schools that were already using similar techniques, and we found three: High Tech High in San Diego, Manor New Tech High near Austin, TX, and the MET School in Providence (a Big Picture Learning school).  When we visited, we noticed the same thing at each of these schools: students were happy and engaged in their work, so much so that there were no discipline issues, and teachers felt productive and rewarded because of the interest of their students and their results.  While the teaching focus was on projects, these students also did very well on standardized tests.  These visits reinforced our expectations of what we could achieve.  At the same time, we noted that the outsized success of these schools is heavily dependent on the right learning culture, and that culture is difficult for educators to understand and follow.  We learned of countless other schools that have attempted project-based learning but not achieved any where near the same results, and the difference was the visionary leadership of the model schools and their understanding of the culture where students truly own their learning.

Reaching Into The Community

We noted the challenges for education when there are large numbers of kids from poor families, and we experienced many of the unique situations first hand as we worked with underprivileged students at Lincoln Leadership Academy.  This led us to choose Allentown for the location of the model school.  As we began to reach out to community leaders in Allentown, the societal challenges took on new dimensions.  We gained a much greater understanding of the unfair treatment experienced by the poorer families.  We noted the lack of trust they have for institutions and even well meaning outsiders because of how often promises were made that did not materialize.  We encountered how hard it is to reach this population.  This has led our team to attend events, reach out to community leaders, and just be much more involved and present in the life of center city Allentown.

As we started to explore the development of a model school, we became aware of Pennsylvania’s Charter School legislation and its intent to support “laboratories of innovation” for school districts.  This seemed like the perfect vehicle for us, and the only vehicle we could identify to open a free public school.  We tried to test the receptivity of the Allentown School District (ASD) for partnering with us on such a model school, but could not arrange any meetings in the summer and fall of 2013.  We decided to submit the charter school application to ASD in November 2013 to not miss the window to open by September 2014.  Unfortunately, we discovered that charter schools have become controversial because of financial details in the legislation and the impact on districts.  The ASD turned down our initial application.  However, through a fortuitous introduction, we discovered that at least some administrators and school board members from ASD were independently looking into doing something similar to our model.  We opened a dialog with key leaders in the district to explore a partnership for both an ASD model school and a larger transformation inside the district, but those meetings were ended by the district before they got too far.  However, ASD subsequently approved a new initiative for a model high school within the district to be developed by Philadelphia non-profit Building 21 for an opening in September 2015.  As this is what we wanted all along, we decided it would be counterproductive to continue pursuit of a charter school.  However, we want to insure that this district initiative fully addresses the many challenges faced by ASD, so we are attempting to assist or partner in some manner.

The driver for the LVenture team all along has been our concern that competitive changes in the global economy are driving dramatic new needs for public education.  Schools recognize the issues to some degree, but they seem unable to get beyond less disruptive changes that will never be able to address the needs.  LVenture is striving to make a complete shift in learning, a reinvention of education, that is demonstrated in our model school, and then to leverage that experience and model to help other public schools make the transformation as fast as they are able.